The Big YO was “born” in the late 1970s, when Tom decided, on a lark, to build the world’s largest yo-yo. “It sounds like some huge promotional scheme, but it actually came about in a very offhand way. I knew these guys who ran a real old-style woodworking shop and one day I was hanging out with them when it just came to us-‘Hey we oughta make a big one.’ These guys instantly glommed onto the idea, and within a month we had this monster yo-yo—a real, working yo-yo—that would go up and down on a rope. It was 1-½ yards high and 256 lbs, so big they had to knock a wall down to get it onto the lathe.”

The Big YO made its public debut at San Francisco’s Pier 39, where it was hoisted over the bay by a giant crane. “The only trouble was that the guy who donated all this nautical rope for the yo-yo insisted it had to be lubricated to work. I was dubious, but we did it, and then of course when the yo-yo stopped it couldn’t climb back up. It just sat there spinning and smoking and finally it burned through the rope and fell into the bay. It was kind of embarrassing. But we had a guy there in a wetsuit. He swam out and got it. We hoisted it out and cleaned the lube off and tried it again, and it worked fine.”

The Big YO has traveled to exhibits worldwide, taking on a life of its own. Appearing in the Guinness Book of World Records and on The Tonight Show with Johnny Carson, the Big YO has become a “celebrity” of sorts.  Currently, it is a featured exhibit at the National YoYo Museum in Chico, California.

Big Yo at the YoYo Museum

On July 31, 1992, an SB2 was sent aloft by NASA for a real around-the-world ride on the Atlantis Space Shuttle. It was employed as a prop for an educational video. Astronaut Jeffrey Hoffman put it through zero G maneuvers including slow motion yo-yoing. The yo-yo traveled 3,321,007 miles and went around the world 127 times (!) before returning to earth on August 9. Above all it affirmed the rejuvenating value of fun and play for all people (astronauts included). 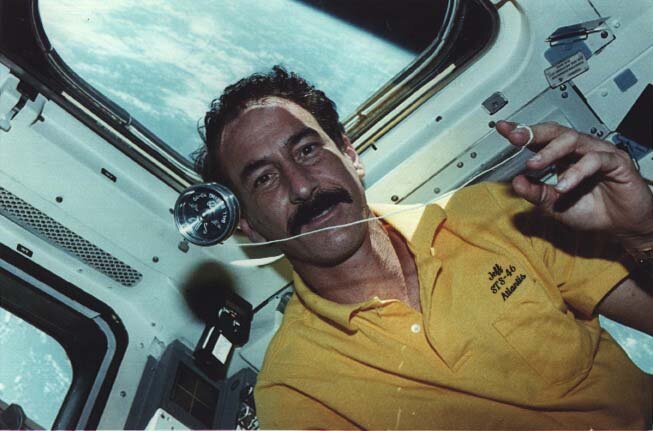 2002-2003 On the Expedition 6, the 6th mission to the International Space Station (ISS) on the space shuttle Atlantis, astronaut Don Pettit took five Tom Kuhn yo-yos with him (including the SB2) to perform tricks in space. These yo-yos remained on the ISS for another 2 ½ years. Don later calculated that as a result of all that time in space, Tom’s yo-yos traveled about 430 million miles orbiting the earth!

What is it about yo-yos in particular that captivates kids, cats, old folks, astronauts, and even grouches? It’s fun – and more. As Frank Conroy states in his novel Stop Time, “The greatest pleasure in yo-yoing is an abstract pleasure – watching the dramatization of simple physical laws, and realizing they will never fail if a trick is done correctly. The geometric purity of it! The string isn’t just a string, it is a tool in the enactment of theorems. It is a line, an idea.”

Of course, a healthy measure of silliness often supersedes the geometry lesson. Science tells us that everything from the tiniest subatomic particles to the great galaxies are constantly spinning. On some level, perhaps the yo-yo reminds us of the spinning miracle of life and that we’re here to celebrate it in play. The yo-yo quickly connects to that joyful inner space in us all that is always spinning and dancing.